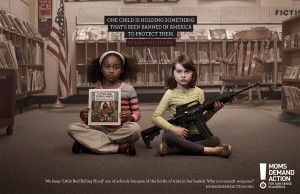 Today, April 15, 2013, Moms Demand Action also launched a new PSA campaign, “Choose One,” a series of print ads featuring assault weapons alongside other objects that have been banned in America to protect child welfare, including Kinder Surprise eggs, the book “Little Red Riding Hood,” and the schoolyard game dodge ball. The ads, in conjunction with a video PSA, are being released through donated media on digital, broadcast and print channels. The campaign was created by the Toronto office of GREY, a global advertising agency.